As Afghanistan fell, her husband, a commando in the Afghan Special Forces, and his family fled, with a hand from a Green Beret Italian buddy 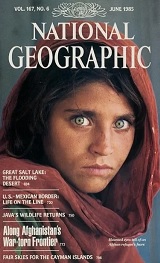 arrived in Italy as part of the West’s evacuation of Afghans following the Taliban takeover of the country, the Italian government said Thursday.

The office of Premier Mario Draghi said Italy organized the evacuation of Sharbat Gulla after she asked to be helped to leave the country.

The Italian government will now help to get her integrated into life in Italy, the statement said.

Gulla gained international fame in 1984 as an Afghan refugee girl, after war photographer Steve McCurry’s photograph of her, with piercing green eyes, was published on the cover of National Geographic. McCurry found her again in 2002.
(...)

We have 777 guests and one member online