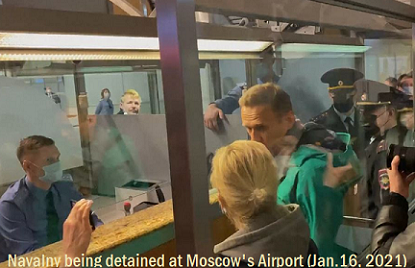 Moscow, Jan. 17.– Russian opposition figure Alexey Navalny has been detained by police at Moscow’s Sheremetyevo Airport after returning from Germany, where he had been recovering following an alleged poisoning attempt last summer.

Navalny and his wife Yulia left the plane together on Sunday evening with the rest of the passengers and drove to the terminal in a bus. The activist was arrested at the immigration desk.

Russia’s prison authority has confirmed the detention. Navalny, who was wanted for breaching the terms of his probation from a previous criminal case, will remain in custody until the court rules on pre-trial restrictions against him, it said.

Navalny’s plane touched down at Moscow’s Sheremetyevo Airport, having been diverted from Vnukovo Airport where a large crowd of his supporters had gathered. There were minor scuffles with police and several arrests at the latter location. His close associates Lyubov Sobol and Ruslan Shaveddinov were among those held.
(...)

back to top
Tweet
If the machine of government is of such a nature that it requires you to be the agent of injustice to another, then, I say, break the law.
Henry David Thoreau