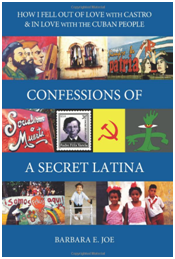 Barbara E. Joe is a convincing and persistent promoter of human rights and individual freedoms, active with Amnesty International since 1981 in the Caribbean region, including Cuba. She has been a volunteer with several noble causes of social interest and, above all, from the early 1950’s to the present, she has certainly been in love with the Cuban people (in love with their island, their traditional foods, and their music), but also touched by their anxieties and suffering. It is important to note that Barbara has maintained since the early 1990’s a long and close relationship with prominent members of the Cuban opposition in their peaceful struggle to get proper respect for their human rights and individual freedoms.

"Confessions of a Secret Latina" extensively elaborates on her life experiences in several Caribbean countries, with special emphasis on her visits to Cuba. That approach makes this book an excellent testimonial contribution that will surely be very much appreciated by future historians and by contemporary political analysts, considering the remarkable contribution that she makes about the complicated panorama of Cuban reality during the last few decades. Whatever your views on the brothers Castro’s regime, readers will find something new and revealing in this book.

Barbara exposes in detail the sad and harsh daily reality that the Cuban population is suffering, with frequent anecdotes and descriptions of the main aspects emerging from the lives of common Cubans and those of many ostracized dissidents. She elaborates in this book a detailed and frank perspective on the Cuban totalitarian regime -a truly extreme version of Soviet Stalinism- and of the hardships of daily life, the shortage of medicines, the terror unleashed by the State against all who have, or are perceived to have, differences from the official position on political and/or economic issues, the banning of meetings of more than three people, the disappointments and contradictions of their present lives devoid of any hope for a future of prosperity and freedom, the hopelessness and challenges they are facing in their future without any clear vision on how to solve them, and the escapist dreams of the young population anxious to emigrate (mainly to the USA), etc.

The anecdotal value of many of its segments is extremely important for readers and researchers seeking a wider scope and proper realism about the plight of the Cuban people. It also has a highly important additional value because this reality emerges from the perspective of a person who not only was initially an admirer of a perceived liberation quest that apparently was authentic in its early days, but also because the writer is someone who may have greater objectivity and less passion in coming from an outsider’s perspective. This allows her to contemplate and analyze both from the inside and outside many events and experiences without the repressive intrusions of the regime, in spite of the fact that she finally suffered firsthand, perhaps due to an excess of naiveté, the arbitrariness of the Cuban authorities.

Her views are also important considering her long experience as an Amnesty International activist, trained to consider the facts in her efforts as a devoted human rights and fundamental freedoms’ advocate, a volunteer responsibility that gives her the privilege of establishing the objective parameters and comparisons that this work reveals about the social disintegration and the anthropological damage inflicted on the Cuban people as a consequence of the brothers Castro’s long-lasting dictatorship.

In her postscript written in 2014, she wonders and tries to elicit where this troubled country will be going after the death of Venezuela's President Chávez, with the strong deterioration of the economic and social infrastructure and the increasing backwardness in global technological advances occurring in Cuba. Venezuela’s subsidies are waning and the Cuban authorities have no alternative solution beyond their endemic dependency on foreign largesse.

Barbara Joe offers a clear perspective on all these problems and issues to interested readers.

"Confessions of a Secret Latina: How I Fell Out of Love with Castro & In Love with the Cuban People " is available at Amazon.com both in Kindle form ($5.99) and Paperback ($18.99). We certainly recommend it to our readers.

Real Democracy: the New England town meeting and how it works

We have 717 guests and no members online