Sept. 10.– Texas Gov. Greg Abbott signed a bill passed by the GOP-led legislature that is designed 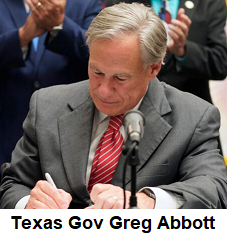 to stop social media companies from censoring users based on their political statements or viewpoints.

The measure was introduced earlier this year but was delayed when dozens of Democrat state lawmakers left the state to deny Republicans quorum and block the passage of a voting overhaul bill that Abbott, a Republican, signed several days ago.

House Bill 20, the social media bill, was signed by Abbot on Thursday.

It prevents companies from suspending users based on their politics. It allows Texas residents to file lawsuits to reinstate accounts that are deemed to have been unfairly targeted and removed. Namely, the legislation targeted platforms that have at least 50 million users, which would include Facebook, Twitter, and YouTube, among others.

“There is a dangerous movement by some social media companies to silence conservative ideas and values,” said Gov. Abbott ...

We have 598 guests and no members online