Dharamsala, July 20.– The Dalai Lama defended religious freedom as freedom of thought while calling for an end to religious conflict in a special video message to the International Religious Freedom Summit in Washington, DC last week.

“We human beings, unlike other animals, we have this very sharp 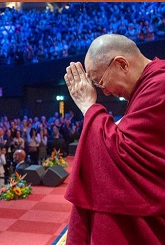 Dalai Lama intelligence and also have the ability to visualize a long future,” he said. “So in that respect, the various different religious traditions develop. So religious freedom is actually in a way the freedom of our thought.”

The summit, a grassroots gathering of civil society and religious groups from around the world, was held from July 13 to 15, 2021. The Office of Tibet-DC hosted a side event at the summit at which Sophie Richardson of Human Rights Watch spoke.

We have 483 guests and no members online