Tibetans are reclaiming their religious freedom 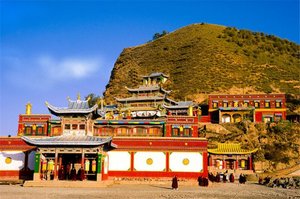 Jakyung Monastery, where 30 monks were expelled in 22 October 2021

On 21/22 October 2021, 30 teenage monks from Jakyung Monastery, and a further 50 from Deetsa Monastery, in Bayan County (Cn: Hualong), Qinghai Province were expelled by state officials. Security officers entered the monasteries and forcibly removed the students, before returning them to their respective homes.

Tibet Watch sources - under the condition of anonymity for their personal safety - reported that, upon return to their family homes, security officers informed students that they could no longer wear monks' robes, nor could they attend school. Such a directive limits young Tibetan Buddhists' access to their cultural heritage, as monasteries serve as an essential resource for Tibetan language and cultural learning.

The Dalai Lama and the Tibetan diaspora are able to share the teachings of Tibetan Buddhism with the whole world. But sadly, in Tibet, Tibetan Buddhism faces threats to its survival as a result of Chinese policies. Tibetans are being persecuted for their beliefs. They can be arrested simply for owning photographs of the Dalai Lama or celebrating his birthday. Inside Chinese prisons, they can be beaten and tortured.

Ongoing reports of arresting Tibetans for simply owning photos of the Dalai Lama, expelling monks and nuns from their religious institutions, and preventing school children from taking part in religious activities make clear that the right to practica their religion is a continuous struggle for Tibetans. 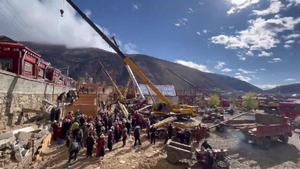 Tibetan school forcibly demolished by Chinese authoritiesThose who seek to study Buddhism endure intrusive security measures in monasteries than operate under heavy-handed Chinese restrictions. Their attempts to practice their faith are interrupted by China's attempts of political brainwashing in the form of "patriotic education".

To top it off, China is trying to control the Tibetan reincarnation system. After abducting the reincarnated Panchen Lama and his family when he was just six years old, the Chinese Communist Party now says it plans to select the next Dalai Lama—an absurd claim that the international community needs to respond to decisively.

back to top
If peace cannot be maintained with honour, it is no longer peace.
Lord John Russell

The US Commission on International Religious Freedom (USCIRF) is an independent, bipartisan U.S. federal government commission, created in 1998 by the International Religios Freedom Act (IRFA). USCIRF Commissioners are appointed by the President and the leadership of both political parties in the Senate and the House of Representatives. USCIRF's principal responsibilities are to review the facts and circumstances of violations of religious freedom internationally and to make policy recommendations to the President, the Secretary of State and Congress.

Country chapters begin with a one-page overview of USCIRF's findings, the reasons for the country's designation by USCIRF, and priority recommendations for action. Each chapter documents events that took place over the reporting period, discusses relevant legal and human rights issues, emphasizes important elements of the bilateral relationship with the U.S., and details recommendations that would promote freedom of thought, conscience, religion or belief.

We have 767 guests and no members online